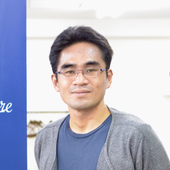 Daisuke is a developer working for an English coaching start-up in Japan.

Outside of his daily job, Daisuke looks at random interest looking technologies like:

His favourite editor is Vim 😁